The top 2022 iPhone and iPad subway apps for New York

It’s simple to figure out with your iPhone and the right App. In this article, we tested two well-known NYC subway apps and compared them to maps after downloading and testing them. There was no doubt who won.

App for the New York Subway

The Free and VIP versions of the New York Subway MTA App are available for selection after downloading.

Paying for the app doesn’t make much sense if you’re only in NYC for a few days. Save your cash for that much-needed $6 cappuccino to get you through the commute.

The free version has numerous pop-up ads that appear every two seconds. X-ing out of commercials is an annoyance no one needs when the wind is blowing, chilling the sweat that has gathered underneath your coat and you’re jostled in a sea of commuters.

The New York Subway MTA App is also not very user-friendly because the map interface itself resembles the old paper maps your dad used to pull out during the Stone Age, when there was no technology. You can achieve the same results by taking a screenshot of the NYC Subway Map from Google Images.

Any iPhone running iOS 14 or later can use the 72 megabyte-sized New York Subway MTA App. A single purchase will set you back $25.99. There are also $9.99 annual and $3.99 monthly subscriptions available. A free version is accessible (with ads).

The next app is called New York City Subway, and it is presented in black and yellow.

This app has intrusive Google Chrome advertising that are challenging to dismiss, making it marginally worse than the New York City MTA app. The app’s lack of maintenance or track closure updates, which is a major problem while traveling in constantly-evolving NYC, is the deciding factor, though. As you are repeatedly diverted, you’ll notice that your time is wasted and that your legs are burning.

Any iPhone running iOS 13 or later will be able to use the 21.4 megabyte New York Subway App. A free version is accessible (with ads).

The finest apps are those that are cost-free, operate without a hitch, and are useful without getting in the way. This is valid in regards to Apple Maps.

The interface is clean and uncluttered. Your location is indicated by a blue dot, and after you enter your destination, Maps will find the quickest path to get you there starting from your precise location rather than the closest station. This is useful, for example, if you’re in the middle of Central Park and are unsure of where the station closest to you is located.

However, neither the New York Subway MTA App nor the New York City Subway App will provide you real-time directions to get out of the jungle. Apple Maps is your best option if you struggle with directions.

Additionally, Apple Maps offers a variety of transportation options, including driving, walking, taking public transportation (bus or metro), cycling, ride-sharing, and more. Consider whether walking a quarter mile to your destination is really that bad if it’s rush hour and you don’t feel like cramming yourself in a train next to some guy eating his foul-smelling tuna and egg sandwich.

When you select transit, the app will display the closest metro entry points, outline the lines you must take to get where you’re going, and provide an ETA. 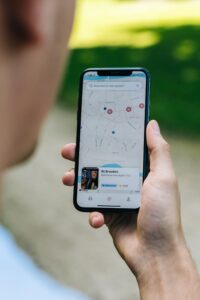 Using Apple Maps has the added benefit of the apps communicating with one another. When you select ride-sharing, Lyft will appear immediately. Scroll down to see images and Yelp-powered reviews of the station if you wish to see pictures of it.

If you’re unsure whether the pizza shop you’ve chosen serves the greatest in the city, this is a huge assistance.

Any iPhone with iOS 10 or later will be able to use Apple Maps. The complete Apple Maps app is free.

Beware: Google Maps and Apple Maps are not interchangeable. You’ll probably find you’ve been heading in the wrong way three blocks into using Google Maps. Not enjoyable to be late for a business meeting while it is pouring rain.

You are responsible for preventing internal instability and elevated cortisol. Take it easy on yourself when you next visit New York City and download Apple Maps for the most convenient, effective, and cost-free experience.

There is a possibility that you will be able to purchase from a T&E repair store. Our website serves as a repository for information about various electrical gadgets. You will find that the prices at our T&E store, where you can buy and sell electronics like iPads and iPhones, are competitive. In addition to that, we offer repair services for iPads as well as other types of electronic gadgets. You are welcome to visit our T&E repair store if you are experiencing any issues with your iPhone or Android phone that require repair. The repair services segment is provided by trained technicians and engineers. You may obtain a reasonably priced and speedy repair for your phone by using our services.

In addition, the repairs for your gadgets will complete as quickly as possible and at a reasonable rate. Today we will be signing a new lease for a new retail location. The communities of Phoenix, Avondale, Glendale, and Tolleson will be served by this store. All the states are Arizona state. Residents in Glendale, Phoenix, Tolleson, and Avondale in Arizona can now take advantage of our repair service.